The Chairman of the All Progressives Congress (APC) Adams Oshiomhole has accused the Deputy Governor of Edo State and his political son, Philip Shuaibu of betraying and disgracing him in his village.

The former Edo State Governor who disclosed this when his supporters paid him a visit on Tuesday November 19 at his country home in Iyamoh, blamed the internal crisis rocking the APC in Edo State on Shuaibu and others.

Oshimhole recounted how he supported Shuaibu in becoming the State’s Deputy Governor even when his own people stood against him.

“There is nothing I have done in life that I didn’t have to fight but as you can see by the special grace of God there is no fight that I was forced into that I have not prevailed because I do not go out of my way to look for trouble. I actually do my best to make peace but if it fails, God will give the enablement to stand and defend the truth,” Oshiomhole said.

“The only thing I will say today to anyone who is here, who is an agent of my son; when I talk of my son, I’m talking of Philip Shiabu, who now thinks that his own political future requires that he attacks me and import thugs to disgrace me in my village.

“Supposing I was dead after 2016 and somebody tells me that my son Philip will organise people to attack my house or to attack my village, to disrupt the convocation, maybe my body will be turning in heaven and I will not believe but the fact that I’m alive to see someone who did not win his own (polling) booth because his own people in his own village in his own community of Jattu did not want him because they apparently know him better than I do. But I stood by him, I stood for him and he became the deputy governor.

“If all that transpired now is to use that power to humiliate me but God didn’t allow it. As you can see, who can fight the battle? It is only God so I leave the burden of guilt to them and I will not repay evil with evil. 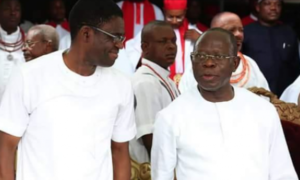