The crisis rocking the primary school education in Edo State was further deepened on Sunday with the rejection of the new resumption date scheduled for September 2, by the State Universal Basic Education Board.

The state branch of the Nigeria Union of Teachers in a statement by its Assistant General Secretary, Mr Moni Itua, asked its members to disregard the call by SUBEB for resumption on September 2 for the first term of 2019/2020 school calendar.

Itua urged the board not to constitute itself into a “parallel ministry of education” as well as usurping the functions of the ministry by ordering a different resumption for primary school teachers in the state.

“In continuation of your board’s insensitivity to the human dignity and plight of our primary school teachers, the attention of the Nigeria Union of Teachers, Edo State Wing, has been drawn to your circular letter — SUBEB/A/7VOL.IIT/90 — of August 20, 2019, wherein you directed teachers to resume for the 2019/2020 first term academic session on September 2, 2019 on one hand and in a twist, further directed the same teachers to also resume a week earlier than the pupils (that is, on the 2nd of September, 2019) to enable them put all arrangements in place for effective take-off of teaching/learning process.

“Arising from the above directives by your board, the state wing executive council of NUT wants to inform you that public primary school heads and their teachers are not the ones to clean up classrooms or cut grasses in their school compounds, but shall only act as supervisors to the pupils in executing such assignments on their resumption, if your board lacks the capacity to provide or employ cleaners and gardeners in the schools.

“Your board’s unending shenanigans and arm-twisting of our teachers which are now dovetailing into full scale tramping on their rights should stop henceforth,” he said.

While directing school heads and their teachers to disregard the board’s circular letter regarding the September 2, 2019 resumption date, Itua urged them to adhere strictly to the union’s directives.

It will be recalled that the teachers had last week issued a three-week strike notice to the state government if it failed to meet its demands, including the rejection of competency test for teachers, release of the approved N60m subvention to schools and the payment of EDO BEST stipends of 2018 and 2019 to teachers, among others.

A circular from the human resources department of SUBEB dated August 20, 2019 had directed teaching and non-teaching staff in public schools across the 18 local government education authorities to resume school on Monday, 2nd of September, 2019.

The circular was signed by Mrs Ehigiamusor I.Lydia, director, human resources and management on behalf of the executive chairman of the board, Mrs Joan Oviawe. 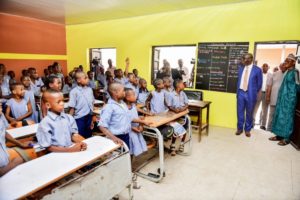