The program is called ‘Owo Arugbo’ (stipends for the elderly).

Ekiti State Governor, Dr Kayode Fayemi, his wife, Erelu Bisi Fayemi; with state officials pose with some beneficiaries of the State’s Social Security Scheme for elderly citizens (Owo Arugbo), during the relaunch of the scheme in Ado-Ekiti…on Wednesday

It will be recalled that Fayemi during his first term as governor of the state between 2010 and 2014 introduced the monthly payment stipends to elders in the state from sixty-five years and above but abandoned by the immediate past administration.

Fayemi launched the programme at the Ekiti parapo pavilion in Ado Ekiti. He said his administration is targeting 20,000 aged people to benefit from the programme.

The governor noted that 13,000 people have so far registered. Governor Fayemi who spoke in Yoruba thanked the world bank and others for their assistance.

Fayemi said by the end of his four years in office Ekiti state would have become a reference in Nigeria.

He maintained that the programme has no political colouration in the selection of beneficiaries, saying he promised during his inauguration last year to make life more meaningful to all and sundry.

The governor added that the World Bank would be supporting the scheme in order to expand and make it better for the beneficiaries.

He said, “As we mark our first anniversary today, I am glad to announce the fulfilment of that promise. You will all recall that when we started the programme, it was the first of its kind in sub-Sahara Africa. It attracted criticisms and commendations alike.”

”I am glad that many, including the Federal Government, have taken a cue from us in the realization that Social Security for the vulnerable segment of our population is the way to go. It is on that premise to cater for our people that made Social Investments to be one of our 5-Points Agenda.

”In order to expand and make the scheme better than it was during the first term, we are now in partnership with the World Bank in carrying out this laudable programme. Though, our partnership with the World Bank on the social investment project dated back to our First Term in Office when we commenced the Youth Employment and Social Support Operation (YESSO). Through YESSO, a Single Register of Poor and Vulnerable Households was created from a survey of communities across the 16 LGAs using internationally accepted standards of poverty indices.”

Fayemi disclosed that no fewer than 13,813 persons have been selected for the first phase with the payment of N20,000 each to the beneficiaries every three months through their bank accounts.

According to him, the government would follow up on the beneficiaries so as to ensure that the funds are adequately deployed to enhance productivity and have maximum impact. 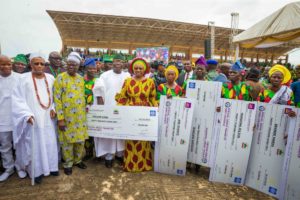