The Leader of the Shiites in Nigeria, Sheikh El-Zakzaky who is in India for medical care has threatened to return to Nigeria over what he feared as plot to kill him and his wife in New Delhi.

“They’re holding us in what looks like worst detention facility than that of Nigeria,” Elzakzakky said in a subtitle of his audio message on the current situation in Delhi, India shared on a twitter handle @SZakzakyOffice.

The transcript of the audio message of Sheikh Zakzaky from India is as below:

“We are now here in New Delhi, India. As you all know there was an arrangement for us to come here to seek medical care regarding the ailments that we have, myself and Malama Zeenah.

She, Malama Zeenah has a full bullet lodged in her body(that needs to be removed), also she is in need of a knee replacement surgery in addition to other problems.

As for me, there are shrapnel, very small fragments in my eyes, in my hands and some in my right thigh that were slowly releasing toxins into my system which caused a lot of complications, which we later discovered that they were the caused of the mini strokes I have had, both the first and the second time.

So we were thinking the first thing to be done is to remove the shrapnel, which is a procedure that couldn’t be done at home and the doctors suggested that we should go abroad where it will be possible for the procedure to be done.

Then the second thing would be to clean my body of the toxins, which I was told are deposited in the bones and some in the flesh and this normally takes time to be done.

I also have a problem with my eye which the doctors that attended to us since after I had a second operation and my sight weakened, suggested that I should be taken to better facilities to have it tended to”. 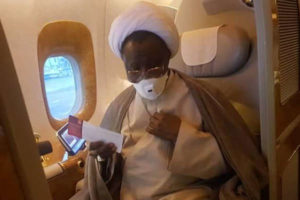