The Ohanaeze Ndigbo, the apex Igbo socio-cultural group, on Thursday congratulated President Muhammadu Buhari on his victory in the Presidential election of February 23.

The News Agency of Nigeria recalls that President Muhammadu Buhari of the All Progressives Congress was declared the winner of the election by the Independent National Electoral Commission on Wednesday, having polled 15,191,847 votes, winning in 19 states.

Buhari defeated 72 other candidates, including Atiku Abubakar, the candidate of Peoples Democratic Party, who scored 11,255,978 votes and won 17 states and the FCT, to occupy the second position.

The Secretary-General of the group, Chief Uche Okwukwu, gave the congratulatory message while briefing newsmen in Enugu.

“The Ohanaeze Ndigbo heartily rejoices and congratulates President Muhammadu Buhari, GCFR, on his well-deserved victory at the Presidential polls on February 23.

“His victory as exposed by the majority of votes cast has clearly shown that the President has been on the right course in the last four years.

“Ndigbo are deeply happy that Mr President secured more votes in Igbo land than he got in 2015.

“We urge all Nigerians and the international community to accept the verdict as the election was adjudged free, credible, transparent and peaceful.

“Ohanaeze is calling on all not to heat up the polity through unguarded utterances and actions,’’ he said.

Okwukwu added that the leadership of the group would be meeting with President Buhari next week to present to him an official congratulatory message on his well-deserved victory at the poll.

He, however, said that the group would use the occasion to present to Buhari the charter of their demands for infrastructural uplift of the entire Igbo-speaking areas of the country. 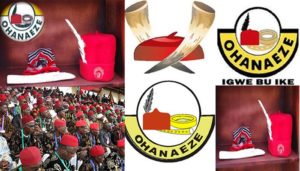