A Nigerian Engineer identified as Tochi Nwawuba, has shared a video which captured moment he was allegedly arrested, handcuffed and extorted by SARS officers for keeping beards.

The incident reportedly occurred at Lekki Phase 1 and he further claimed that the security operatives demanded a N200k bail from him. He said he however secured his freedom with N50K as they insisted on being granted access to his phone and laptop.

He wrote “I was arrested yesterday by SARS on my way from work….my beards is now Nigeria problem despite I told them my profession as an engineer with my ID but them no wan gree hear my own, all they want to do is to open my phone and laptop that was at the back of my car and me self no gree for them too and this was how I was kept like a criminal at lekki phase1 last night and was asking 200k for my bailout on the road, may God help us in this country becos we have no human right in Nigeria but I later pay 50k cash that was with me to them on the road becos they told me they will shoot me and put a crime on my head if I don’t cooperate with them” 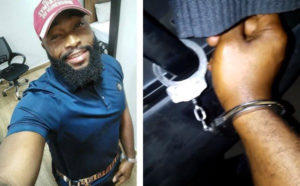