Their fourth round tie against Yeovil Town has already been delayedby 15 minutes after it was claimed on social media that the opponent’s fans made racial insults at the home team.

The Football Association has already launched an investigation, saying it was ‘deeply concerned’, while the Metropolitan Police are also looking into the allegations.

It comes after England players were subjected to shocking racial abuse in a match against Bulgaria during a Euro 2020 qualifier in Sofia.

The Haringey home players walked off the field 64 minutes in, led by Haringey Borough manager Tom Loizou, shortly after Yeovil had scored.

‘Game has been abandoned following racial abuse. Horrendous afternoon. It must be said that 99.9% of @YTFC fans are also disgusted by what’s happened as much as we are. One club, one community.’

"We're sometimes quick to get on our high horse at times and point the finger. We still have a huge problem in our leagues."

After allegations of racial abuse aimed at the Haringey Borough goalkeeper by Yeovil fans, the hosts have walked off.#BTSportScore pic.twitter.com/TnS4hPhcFY 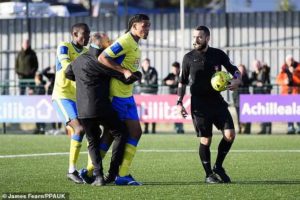