Post secondary school students of Enugu State, who are beneficiaries of the scholarship offered by the administration of Governor Ifeanyi Ugwuanyi to study in Mewar University, India, on Friday, paid a thank-you visit to the governor at the Government House, Enugu, ahead of their departure.
1
The elated students, numbering 22, who were accompanied by the Permanent Secretary, State Ministry of Education, Mrs. Nwanneka Onah, and other officials of the Ministry, said they were overwhelmed by Gov. Ugwuanyi’s benevolence, love, care and kindness in making their dreams come true.

It would be recalled that Gov. Ugwuanyi’s administration had offered four-year scholarships to 680 indigent students of the state studying engineering programmes in Enugu State Polytechnic Iwollo, Ezeagu Local Government Area and the Institute of Management and Technology (IMT), Enugu.

Speaking on behalf of the new beneficiaries, Clara Nnaji, an ex-student of Anglican Girls Grammar School, Awkunanaw, Enugu South Local Government Area, thanked Gov. Ugwuanyi for putting smiles on their faces and that of their parents, adding that they have found a father in the governor.

Nnaji disclosed that the governor has “succeeded in shaking off shackles of all forms of poverty in our families”, stressing that “a good number of us never had the hope of leaving this country for studies”.

According to her, “even though I had it in my heart, I never ever imagined that I will actualize this dream in the next ten years. But in a space of two months, Your Excellency, you made it possible and I want to on behalf of other beneficiaries, across our dear Enugu State, say a very big thank you for putting smiles and hope on the faces of our parents”.

Offering prayers for Gov. Ugwuanyi while presenting a gift to him, Nnaji said: “We know that there is nothing on earth that we are coming to give you at this point that can be equated to your love and kindness, but we will say a very big thank you and pray that on this seat as Governor, Your Excellency, our God will shower blessings on you; the Lord will protect and preserve your life”.

Earlier in her introductory remark, the Permanent Secretary, Ministry of Education, Mrs. Onah, stated that the scholarship was the offshoot of the visit of the Pro-Chancellor of Mewar University, India, to the governor in May 2019, “requesting for collaboration with the Enugu State Government to send some students on scholarship at both undergraduate and postgraduate levels”.

Mrs. Onah disclosed that Gov. Ugwuanyi, consequently “gave an approval for 22 Enugu State youths to be given scholarships to study in the university”.

She added that the governor also approved funds for the processing of their travelling logistics, pointing out that their school fees have already been paid.

“Any moment from now, Your Excellency, they will be departing for India, and we deemed it necessary that they come and see you. These students never imagined that one day they will be sent outside the country to study. You have done a lot for them and they are here to say thank you”, Mrs. Onah said.

Chief Mike Ugwu of the education ministry, on behalf of the state government, prayed for God’s protection and success of the students, while the governor committed their mission into the hands of God and congratulated them.

Enugu State is truly in the hands of God. #amokelouis 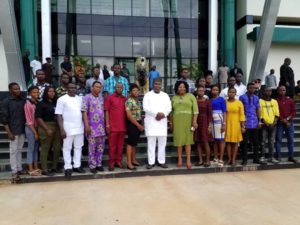