The issue was flagged Wednesday by multiple social media users who said Facebook and Instagram (which is owned by Facebook) were filtering out mentions of the hashtags related to the protests, which have been trending in recent days.

The protests, which have lasted for almost two weeks so far, began as demonstrations against Nigeria’s Special Anti-Robbery Squad (SARS)—a unit of the Nigerian police force that has been accused of alleged extrajudicial killings and the indiscriminate extortion of young people. Now, however, they have morphed into broader protests against general police brutality and the Nigerian government.

Users who attempted to post content with the #EndSARS hashtag on Wednesday were met with an alert saying that there was “false information in your post.” 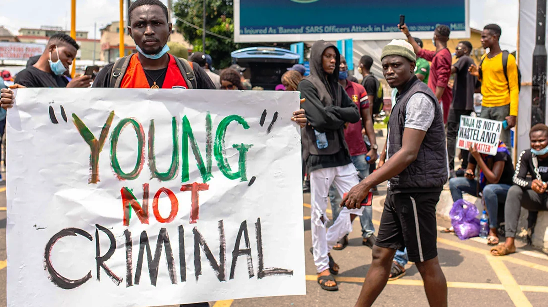 Facebook did not say how the issue arose, how many people it affected, or when it would be fixed. It’s not the first time that Facebook has inaccurately flagged content from activists. Just last week, Facebook admitted that it mistakenly marked posts by the Sunrise Movement group in Sacramento as going against its Community Standards, again without explaining how that happened.

The government is now attempting to silence local media, with the Nigerian National Broadcasting Commission (NBC) warning media outlets not to “embarrass individuals, organizations, government or cause disaffection, incite to panic or rift in the society at large.”

As the protests continue to roil his country, Nigeria’s President Muhammadu Buhari, a former 1980s military dictator, has not spoken publicly for over a week and has not commented on Tuesday’s massacre.

Before his self-imposed silence, Buhari on October 12 promised “extensive police reforms” and to bring those responsible for extra-judicial killings to justice. However, he also downplayed the scale of the problem of police misconduct, saying it was limited to “a few bad eggs.” Now, activists are calling for the president to resign.