Decided to finally join Nairaland, just want to warn everyone to be very careful of who they patronise in the name of career advancement ó.

For like a year now, one ‘fake doctor’ called John Iguve has collected money from people to register them for an online course by University of Washington but didn’t do so. Refund the people, he has refused and has boasted that nothing will happen.

My sister, who is among those “Dr” John Iguve swindled, has been angry at his do-your-worst attitude, which sent her digging. What she found include that he’s a microbiologist who masquerades as a medical doctor.

She said, ‘I paid 13k at first so he posted that the number of participants weren’t up to the number that could go for the 13k hence we have to add extra 12k to make up 25k. That 25k went into thin air and he refused to pay since then. He’s been using our money to flex and post on social media. All of us had to go and register somewhere else. Because of the lost time, we all failed that course and it is extremely painful”.

I don’t know if his workplace knows about it ó, but my sister has vowed that they will stop his criminal actions before he defrauds others. I say make I warn you guys to beware of him oooooo. 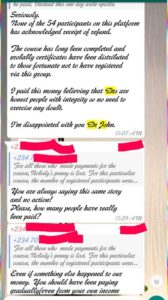