There is no gainsaying the fact that recent weeks have been challenging for the Peoples Democratic Party (PDP). The opposition party has been battling with cold since one of its pillar of strength , perceived financier and governor of Rivers State, Nyesom Wike, sneezed.

The party has suffered one sleepless night after the other since the Rivers State governor stormed out of the venue of the presidential primaries of the party from which Alhaji Atiku Abubakar emerged the presidential candidate of the PDP in the build-up to the 2019 general elections. Since then, he has taken various other actions that left the minders of the party worried.

For instance, in the aftermath of the National Assembly elections where Hon. Kingsley Chinda, the candidate he and other party chieftains supported for the minority leader’s seat in the House of Representatives lost to Hon. Ndidi Elumelu, Wike roundly condemned the panel set up by the party to investigate the ‘coup’ against the party, describing it as corrupt.

Then came the dismissal of Atiku’s petition in the case he filed at the Presidential Election Petition Tribunal against Buhari’s re-election. While the leaders and chieftains of PDP kicked against the judgment, Wike openly congratulated Buhari. Wike’s move sparked anger in PDP’s camp as chieftains of the party called his loyalty to question.

In the midst of these came the rapport the Rivers State governor developed with his Ekiti State counterpart, Dr. Kayode Fayemi, since Fayemi took his stand on Wike’s side in the latter’s alleged demolition of a mosque in Port Harcourt. Fayemi has since followed this up with a visit to Wike in Port Harcourt where he also commissioned projects.

The development has left many wondering if Fayemi’s actions were impelled by his position as the Chairman of Nigeria Governors’ Forum (NGF) or a prelude to an agenda that is yet to unfold. The more curious observers are even asking if Fayemi is the one anointed to midwife Wike’s final parting of ways with the PDP as is being speculated in some quarters. 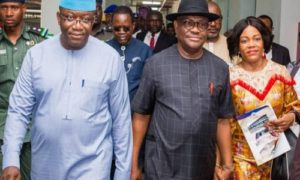