Here is the hilarious moment football legend Brazilian Kaka was shown a yellow card just so the referee could take a selfie with him last night in a charity match, MySportDab reports.

The former AC Milan and Real Madrid maestro pulled on the Selecao shirt once more in a charity match for peace in Israel and was on the scoresheet in a 4-2 victory for Brazil.

Ronaldinho, Roberto Carlos, Rivaldo, Cafu and Bebeto were also among the legends taking part in the friendly fixture but it was Kaka who was the biggest hit – with even the person officiating the game wanting a picture with him.

Incredibly, while the 2007 Ballon d’Or was dribbling in midfield with his side 3-2 up, the female referee blew the whistle and stopped the game for a moment.

Much to Kaka’s confusion, the official then went to her pocket and booked him – before getting her phone out and asking for a selfie with the 37-year old – who was more than happy to oblige.

The Brazil players made it even better by shaking the ref’s hand and creating a nice, fun moment in the charity game. watch the video…

Nothing to see here. Just a referee showing Kaka a yellow card before taking a selfie with him. ?pic.twitter.com/k3lUHJXd9N 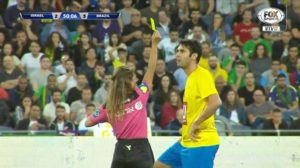