Fernando Torres has announced his retirement from professional football but lost 6-1 in his final match as his Sagan Tosu side conceded six goals to Andres Iniesta’s Vissel Kobe, MySportDab reports.

Torres, who announced his retirement from the game earlier this summer, played the full 90 minutes of the J-League encounter on Friday but Tosu were completely outmatched at the Best Amenity Stadium.

The visitors got off to a flying start when Kakeru Yamauchi broke the deadlock after 11 minutes, setting the precedent for what was to come.

Iniesta was next to inflict some damage on his former international team-mate as he converted a penalty nine minutes after the first.

Torres played the full 90 minutes of Friday’s J-League clash but failed to bid farewell with a consolation goal.

Speaking after the match, Torres said: “I would like to thank Japan and all Japanese people that from the very first day welcomed me with excitement and helped me. Also, to the fans of our rivals that always respected me even though I was playing for another team.

“You have taught me a lot of things. You have reinforced fundamental values like to respect, not just the people but everything that surrounds us, so I wanted to thank you all.

“You have a beautiful country, a country that you respect like it deserves. I will come back because there are a lot of places still to visit, a lot of food to try. For me Japan always will be like a second home.” 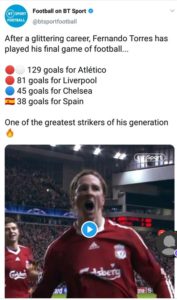