the Federal Government said the 36 state governors on Tuesday kicked against its plan to extend the repayment period of its budget support to state governments from 20 to 30 years.
It explained that the monthly repayment had reduced from N 252m to N 162m based on the extension.
The Minister of Finance, Budget and National Planning, Hajiya Zainab Ahmed, briefed State House correspondents at the end of the National Economic Council meeting chaired by Vice- President Yemi Osinbajo at the Presidential Villa, Abuja .
The minister was joined by governors Willy Obiano ( Anambra), Dapo Abiodun ( Ogun) , Abdullahi Sule ( Nasarawa) and the Minister of Health, Dr Osagie Ehanire at the briefing .
According to her, the state governors were still not satisfied with the repayment extension to 30 years.
She said the Federal Government had made the first and second months’ N252 m monthly deductions in September and October , based on the 20 years repayment period .
Ahmed explained that following the outcry of state governors , another repayment schedule plan extending the years to 30 and monthly repayment of N162 m was presented to NEC on Tuesday .
She said , “ The budget support facility was initially for 20 years repayment period . And when we made the first deduction in September , the states had complained that the amount deducted, which was N 252m , was too harsh .
“ So, since then, the Central Bank of Nigeria, who is the lender, has revised the condition to make the repayment period longer. And so the new repayment period is 30 years. And this means that the states will be paying N162 m monthly. But again today, the states still were not satisfied with the condition .
“ So, we are expecting that the Federal Ministry of Finance, Budget and National Planning , the CBN and the states will engage again with the view of having the CBN further revise the condition to reduce the monthly repayment burden. ”
The Federal Government had in August said a committee had been put in place to facilitate the recovery of N 614bn given to 35 states.
A total of 35 states benefited from the facility and each state is expected to pay back the equivalent of N17. 5bn .
The N 614bn was a conditional budget support provided by the CBN to help states pay salaries gratuities and pensions .
Ahmed on Tuesday also said as at October 22 2019 , funds in the Excess Crude Account stood at $324, 035,696 .29 , while stabilisation fund account was in the margin of N 28, 560, 710, 627.55 and the natural resources development fund account averaging N70 , 691 , 826 ,511. 84, respectively .
The Ogun State governor spoke on efforts by the Nigerian National Petroleum Corporation to check theft of petroleum products in the country .
He said NEC resolved to group issues of smuggling of PMS under illicit trade which might attract grave sanctions.
Abiodun said the report enabled government to arrive at a conclusion that the petroleum products smuggling , oil theft and all other form of ITPP were fuelled by some factors.
He said , “ These include access to illegal markets , high concentration of filling stations at border towns and lack of adoption of appropriate technology to monitor and track movement of assets .
“ The NNPC has proposed to the FG to set up a special task force on illicit trade in petroleum products to compliment the NNPC initiative towards the mitigation of PMS diversion and smuggling . ”
Ehanire presented a status report of diseases taking its toll on Nigerians. 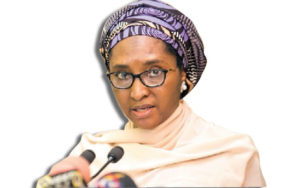