President Buhari, in a letter written to Senate President Ahmed Lawan, which was read during Tuesday’s plenary, requested for the resolution of the Senate for the approval of the sum to be issued to the Kogi State Government.

President Buhari noted in the letter that the federal projects were duly verified by the Federal Government.

The letter read in parts:

“The distinguished Senate President will recall that based on my request for the resolution of the National Assembly approving the establishment of a promissory note programme and a bond issuance for certain inherited local debts and contractual obligations of the Federal Government, the 8th national assembly passed resolutions approving the issuance of promissory notes to refund state Governments for projects executed on behalf of the Federal Government.”

The Senate President further President Mandated the Senate Committee on Local and Foreign Debts to handle the request and report back within two Weeks. 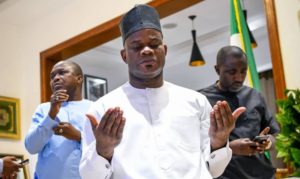