President Muhammadu Buhari has assured the South-East geopolitical zone of a third bridge project, a coastal rail that will terminate in Onitsha with a spur unto Nnewi in Anambra State.

He promised that the construction of the coastal rail would start next year that will pass through Onitsha to Asaba, from Agbor to Warri, from Warri to Utako to Ajaokuata to Abuja.

The president who made the promise in a goodwill message at the weekend in Onitsha during Obi of Onitsha’s 18th Ofala festival said that there were many ongoing roads projects in the South East zone.

Buhari who was represented by the Minister of Labour and Employment, Senator Chris Ngige appealed to the host communities of second Niger Bridge project to give peace chance to enable the construction firm to complete the project as scheduled.

He said the second Niger Bridge is now a reality as work is ongoing while the construction company handling the project has assured of completing the work six months earlier in 2021 than the scheduled date of 2022.

“The host communities should pipe low and should not demand too much compensation to enable the contractor to complete the project on time. The contractor, Julius Berger, said it will complete the job six months ahead of the stipulated time of 2022. The contracting firm promised that they would now complete the project in 2021.
“The second Niger Bridge is now a reality; the pillars are springing up. The funding of the project is in place from sovereign wealth fund and Federal Government fund. I want to assure the people of Onitsha, the people of Anambra State and the people of South East zone that the third bridge which is the coastal rail that will terminate in Onitsha with a spur unto Nnewi later. The construction will start next year. The rail will go through Onitsha to Asaba, from Agbor to Warri, from Warri to Utako to Ajaokuata to Abuja.

“The Enugu-Onitsha expressway is on going. The Umunya section of the road that had been waterlogged has been done. The job is now moving down to Amansea and from there to Enugu; the most important parts of the job have been done. Then, the road from Onitsha -Orba-Amichi- Uga-Arondizugo-Okigwe work is also ongoing. Another road from Enugu-Okigwe-Umuahia-Aba-Port Harcourt, the four sections of the roads have been awarded and immediately after the rain stops, the work will commence on those roads.

“There is award of 9th Mile-Otrukpo-Makurdi road. So the South East zone has not been left out in the infrastructural development,” he assured. 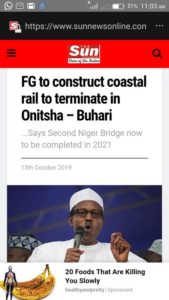