Flood which ravaged Igbokoda community, Ilaje local government area of Ondo State has forced many residents to vacate their houses, even as they lost many properties.

Some of the residents are now living with their friends and relatives outside Igbokoda because of the ordeal.

It was gathered that the flood was as a result of lack of drainages, blocked drainages, and poor or swallow drainages that could not cope with intense rainfall in some areas.

In an interview with one of the major stakeholders of the community, he called on both the federal and state government to come to their aid stressing that the people of Igbokoda had suffered much due to the issue of flood.

Also in an interview with one of the displaced persons, Mr. Olawole Taiwo, he attributed the development to blocked drainages and shallow gutters.

He therefore advised residents to stop dumping refuse into the drainages in order to curb the menace.

He said over 150 tenants have all vacated their buildings, while business operators have escaped due to the activities of the flood. He called on both federal and state government to come to their aid.

He said the flood swept into his house at about 11.00pm in the night, but he managed to escape to another place. He stressed that the community has never experienced such level flooding before, and there is need for urgent government intervention.

Earlier this week, it was also reported that a heavy rainfall of over 8 hours yesterday claimed the life of a final year student of Adekunle Ajasin University, Akungba, Akoko Southwest local government.

Sources said the deceased simply called ‘Doyin’, an Indigene of Ekiti state, was swept away to an unknown destination by heavy flood from a canal very close to her residence in the town and till now her body is yet to be recovered. 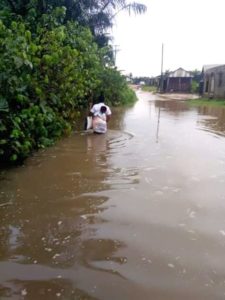