The recession experienced by the Nigerian economy in 2016 as well as lower oil prices affected the revenue collected by the Federal Inland Revenue Service (FIRS) between 2015 and 2018, Tunde Fowler, the chairman, has said.

Despite the challenges, Fowler explained, non-oil revenue such as VAT and company income tax — which he said are within the control of FIRS — have been on the increase compared to pre-2015 figures.

But oil-based taxes, such as petroleum profit tax (PPT), are beyond the control of the service.
He was responding to a memo from Abba Kyari, the chief of staff to the president, who said there were significant variances between the budgeted collections and actual collections for the period 2015 to 2018.

Kyari also said the actual collections for 2015 to 2017 were significantly worse than what was collected between 2012 and 2014.

In the letter dated August 8, 2019, Kyari gave Fowler up till August 19 to explain the reasons “for the poor collections”.

Fowler, who is rounding off his four-year term as FIRS chairman amid speculations that he will not be re-appointed, explained in his response that non-oil tax revenue has actually been on the rise.
He wrote in his response obtained by TheCable: “I refer to your letter dated 8th August, 2019 on the above subject matter and hereby submit a comprehensive variance analysis between budgeted and actual collections for each main tax item for the period 2012-2018 as requested (see appendix 1).

TheCable can also report that Fowler is upbeat that the initiatives he introduced have improve Nigeria’s tax revenue collections.

“Please note that the variance in the budgeted and actual revenue collection performance of the Service for the period 2016 to 2018 was main attributed to the following reasons:

“1. The low inflow of oil revenues for the period especially Petroleum Profit Tax (PPT) was due to fall in price of crude oil and reduction of crude oil production. Notwithstanding government efforts to diversify the economy, oil revenues remains (remain) an important component of total revenues accruable to the Federation.

“3. It is worthy of note that strategies and initiatives adopted in collection of VAT during the period 2015-2017 led to approximately 40% increase over 2012-2014 collections. In 2014 the VAT collected was N802billion, compared to N1.1 trillion in 2018. This increase is attributable to various initiatives such as ICT innovations, continuous taxpayer education, taxpayer enlightenment, etc embarked upon by the Service.

“4. Furthermore, it is pertinent to note that when this administration came on board in August 2015, the target the target for the two major non-oil taxes were increased by 52% for VAT and 45% for CIT. Notwithstanding the increase, FIRS has in line with the Federal government’s revenue base diversification strategy has grown the non-oil tax collection by over N1.304 trillion (21%) when the total non-oil tax collection for 2016-2018 is compared to that of 2012-2014.

“I am confident that our current strategies and initiatives will improve revenue collection and meet the expectations of government.
“Please accept the assurance of my highest regards.”

PRESIDENCY: FOWLER NOT UNDER INVESTIGATION

Meanwhile, Garba Shehu, presidential spokesman, has said Fowler is not under investigation.

In a press statement on Monday afternoon, he said it is necessary “to state categorically that the Chairman of the Federal Inland Revenue Service, Babatunde Fowler, is not under any investigation”.

“The letter from the Chief of Staff to the President, Abba Kyari, on which the purported rumour of an investigation is based, merely raises concerns over the negative run of the tax revenue collection in recent times,” he said.

“Taking a cue from today’s (Monday) presentation of Vice President Yemi Osinbajo at the Presidential Retreat for Ministers-Designate, Federal Permanent Secretaries and Top Government Functionaries , which dwelt on an ‘Overview of the Policies , Programmes and Project Audit Committee,’ a body he chaired, projected revenue of government falls behind recurrent expenditure even without having factored in capital expenditure.

“Consequently, it would appear that the country might be heading for a fiscal crisis if urgent steps are not taken to halt the negative trends in target setting and target realisation in tax revenue.

“Anyone conversant with Federal Executive Council deliberations would have observed that issues bordering on revenue form the number one concern of what Nigeria faces today, and therefore, often take a prime place in discussions of the body.

“It is noteworthy and highly commendable that under this administration, the number of taxable adults has increased from 10 million to 20 million with concerted efforts still on-going to bring a lot more into the tax net.” 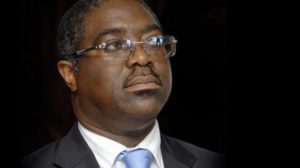