The Independent National Electoral Commission on Sunday  ruled out any fresh governorship election in Bayelsa State as requested by the All Progressives Congress.

INEC’s  Director of Voter Education and Publicity, Oluwole Osaze-Uzzi, in an interview with one of our correspondents in Abuja, dismissed the APC’s demand for a fresh governorship   poll in Bayelsa State.

He said the commission on Friday concluded its work on the Bayelsa State governorship poll.

Also, top officials of  INEC, who confided in The PUNCH on Sunday, said the commission had never granted such a request and that of the APC would not be the first.

One of the officials said, “The APC is asking for what is not possible. The party should forget a fresh governorship election in Bayelsa State.”

The APC National Chairman, Adams Oshiomhole, had in a letter dated February  14, 2020 and addressed to the INEC Chairman,  Mahmood Yakubu,  called for a fresh election in Bayelsa State.

The APC national chairman said the swearing-in of the candidate of the Peoples Democratic Party,  Douyle Diri,  as the state governor was unconstitutional as he did not meet the mandatory constitutional requirements.

The party said although   the Supreme Court nullified its candidate, David Lyon’s victory, it  stated that  Diri also failed to meet the mandatory requirements to become  governor.

It  said the court judgment did not void the votes of   the APC  in the  November 16, 2019 governorship poll in Bayelsa State.   It, therefore, said its votes   must be reckoned with.

The APC had said, ‘‘We are aware that Section 179(1)(b) of the 1999 Constitution of the Federal Republic of Nigeria mandatorily requires a candidate for an election to the office of governor of a state to have not less than one quarter of the votes cast at the election in each of at least two thirds of all the local government areas in the state before the candidate can be deemed to have been duly elected as the governor of the state. This mandatory requirement was affirmed by the Supreme Court in the judgment under reference.”

The Supreme Court had on Thursday nullified  the candidacy  of Lyon and his running mate,   Biobarakuma Degi-Eremienyo, on the grounds that Degi-Eremienyo  presented false information about his educational qualifications in his Form CF001 submitted to INEC as a candidate for the 2019 election.

Justice Ejembi Ekwo, who read the lead judgment, had said Degi-Eremienyo’s disqualification on the basis of submitting false information to INEC had infected the joint ticket with which he and Lyon contested the election and emerged victorious.

Shortly after the judgment was delivered, Oshiomhole had vowed that Diri would not be sworn in as the  Bayelsa State governor because he did not meet the constitutional spread of votes in the governorship poll.

But in their swift reactions, the PDP and the Rivers State Governor, Nyesom Wike, dismissed the APC national chairman’s claim and insisted that Diri  would be inaugurated.

After a meeting of its top management on Friday, INEC, at a press conference confirmed that Diri met the constitutional requirements.

It argued that votes of the APC candidates had been invalidated by the apex court judgment. It therefore, presented a certificate of return to Diri, who was sworn in as the fifth  governor of Bayelsa State on Friday.

After the declaration, our work is done – INEC

When  asked if and when the commission would meet to deliberate on the APC’s letter seeking a fresh governorship election in Bayelsa State, INEC Director of Voter Education and Publicity, Osaze-Uzzi, dismissed the party’s demand.

Osaze-Uzzi asked, “Fresh election to which office or seat?” When our correspondent reminded him that it (the fresh poll) was  for the office of the governor and that the APC had written INEC demanding a fresh election, he retorted, “After the declaration. Our work is done, please.”

But the PDP and the APC clashed on Sunday over the latter’s call for a fresh governorship poll in Bayelsa State.

While, the PDP said the APC’s demand was irresponsible, the ruling party (the APC) stated the opposition party was  being hypocritical.

The PDP National Publicity Secretary, Mr. Kola Ologbondiyan, in an interview with one of our correspondents, advised INEC to throw the letter into a trash can.

Ologbondiyan said by the judgment of the Supreme Court, the APC had been disqualified from participating in any fresh election in the state even if it had been ordered by the apex court.

He noted that the Supreme Court in the judgment voided the participation of the APC in the November 16 governorship election.

The PDP spokesman added that the APC  had  lost the right to stand for any fresh election.

He, therefore, wondered what the APC would gain by calling for a fresh election since according to him, it (the APC) could not participate in the fresh election.

He, however, said that the PDP got the required constitutional votes and spread for its  candidate, Diri, to be sworn in. He stated that INEC did the right thing and obeyed the Supreme Court by issuing a certificate of return to Diri.

He alleged that the APC and its national chairman were plotting to cause a crisis in the polity. He called on the President, Major-General Muhammadu Buhari (retd), to caution Oshiomhole.

He also reiterated the PDP’s call on the Inspector-General of Police, Mr Mohammed Adamu, to arrest Oshiomhole for allegedly making inciting utterances, which he said fuelled the crisis in Bayelsa State before and after the inauguration  of the governor.

The PDP spokesman warned Oshiomhole and the APC against trying to muzzle INEC.

Ologbondiyan said, “First and foremost, it smirks of illiteracy for the APC to say that the PDP did not meet the required spread or the number of votes for it to have been declared the winner of the election”

He accused the APC and its leaders of trying to throw the country into a crisis by destroying the polity.

The PDP spokesman said, “If you look at Edo State, where their chairman comes from, the state is permanently in a crisis; houses are being burnt, people are being killed and that is what the leadership of the APC led by Oshiomhole wants to extend to the entire region of the south and the nation as well. We call on President Buhari to caution Oshiomhole or the IGP should arrest him as we have demanded and question him on why he wants to throw Nigeria into turmoil.

“It is irresponsible of the APC to have written such a letter even when they know that even if a rerun had been ordered by the Supreme Court, they would not participate in that election. The letter is an irresponsible piece of letter that should be dropped into the trash can.”

“The APC are sore losers. They should find somewhere to sit, cover their faces and leak their wounds instead of asking for a fresh poll from INEC. Oshiomhole needs to understand that he does not command INEC and that the commission is not a parastatal or an agency under the APC.”

PDP is being hypocritical – APC

But the APC accused the PDP of being  hypocritical by faulting its letter to INEC.

The Deputy National Publicity Secretary of the APC, Yekini Nabena, while  responding the PDP’s criticism, told The PUNCH that Nigerians were  fully aware of the antics of the opposition party anytime a judgment was against it.

He said, “This is the same PDP that went to the European Union office and the embassies of western countries to protest when the Supreme Court ruled against them in the case of Imo. They went everywhere saying democracy was in danger.

“So, now, democracy is no longer in danger in the case of Bayelsa because they feel the judgment is what they want. Is this not hypocrisy?  If they are sure of themselves, why are they afraid that we will win when the case is reviewed? They should face their problems and leave the APC alone.”

APC may head for Supreme Court this week

Meanwhile, there are strong indications that the APC will be heading towards the Supreme Court this week to seek a review of the judgment annulling the victory  of  Lyon.

The  PUNCH gathered in Abuja on Sunday that the party’s National Legal Adviser, Babatunde Ogala, was consulting with other lawyers within and outside the party as well as the party leadership to take a final decision.

Although the APC national legal adviser was non-committal when asked when the party was going to court, he said, “You will know when we go to court.”

However, the Deputy National Publicity Secretary of the APC, Nabena, said the dispute over the Bayelsa governorship election was “far from over.”

According to him, the position of the APC is well-articulated in the letter written to INEC by Oshiomhole, in which the party demanded a fresh election. 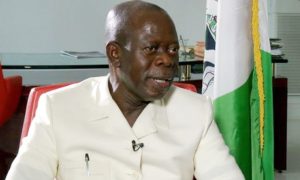 He said, “Like our national chairman said, we are a law-abiding party. That is why we wrote INEC even as we prepare to return to court. We still have confidence in the judicial process. The contention on the Bayelsa governorship poll is far from over.”