Here is a video of the press release by FBI on Nigerian internet scam syndicate.

The yahoo boys have scammed Americans to the tune of $1.1bn between Jan-July this year alone.

The US Attorney’s Office says Thursday most of the defendants are Nigerian citizens.

After search warrants were executed at multiple locations across L.A. County on Thursday morning, federal prosecutors announced a 252-count indictment that accuses 80 people in the U.S. and Nigeria of participating in a “massive conspiracy to steal millions of dollars through a variety of fraud schemes.”

The defendants allegedly laundered the funds through a Los Angeles-based money laundering network. Eleven of them were arrested Thursday in Southern California, while three others were taken into custody elsewhere in the U.S., according to the U.S. Attorney’s Office for the Central District of California.

Two were already in federal custody on other charges, and one was arrested earlier this week. The remaining defendants are believed to be abroad, most of them in Nigeria, authorities said.

According to the indictment, the accused used business email compromise frauds, romance scams and schemes targeting the elderly to defraud victims out of millions of dollars. 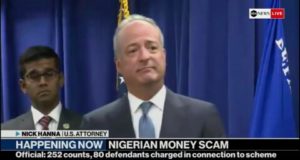