In his effort towards the development of the state and strengthening national integration, Governor of Kano State Abdullahi Umar Ganduje has wooed one of the strong African business tycoons, Arthur Eze, to Kano Economic City, being developed in the state.

am here to, also, on behalf of the people of Kano State urge you to come and invest in our Kano Economic City project. Which is designed to be of global standard with all the necessary structures trailed by the needed security architecture,” Ganduje told Eze in a meeting in Abuja.

Eze assured that he would come and invest immensely in Kano, being a very peaceful state, with a governor he described as “gentle, humane, reserved and people-minded.”

The history of his sojourn into business world, according to Eze, would not be complete without mentioning Kano, “… I was there also when the late governor of old Kano State, Muhammad Abubakar Rimi was the governor then. I was part of those who engaged in the establishment of the then Kano City Television (CTV).”

According to Eze, coming to Kano to invest was as equal as coming back home, assuring that his investment in the state would also be a significant aspect, as a good reminder of his stay in the state those days.

He then said, “Part of my early years as a businessman, I spent them in Kano. Since when Noman’s Land area was like a forest. I stayed in Kano. And for your information, the late Emir of Kano, Alhaji Ado Bayero of blessed memory, was my bosom friend.

“This reminds me of a very striking development you, my Governor, brought to the limelight. That is your recent establishment of four additional First Class Emirates in your state, Kano. I sincerely congratulate you over this all-important development. It is indeed striking and encouraging.”

After congratulating the governor over the new Emirates, he then commended him (governor) for making the son of the late Emir, Ado Bayero, as the Emir of Bichi, “… Aminu Ado Bayero’s choice as the First Class Emir of Bichi is indeed a welcome development. It reminds us of his late father, a complete gentleman,” he said.

Eze explains further, “We all want you (Emir of Bichi) to always be calm, decent, reserved and gentle. Just like your late father, our good friend. Your Excellency the Governor, let me inform all that, the creation of more Emirates is a very strong move that will increase the participation of the traditional institutions in governance.”

In continuation of his remarks, Ganduje praised Eze as one of the fathers of Igbo people across the country, who does many things to strengthen national cohesion and integration between Igbo communities and all other ethnic nationalities in the country. 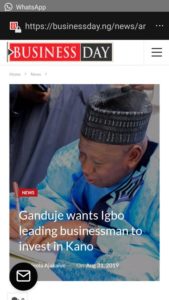