Sequel to several kidnappings along the highways in Edo and Delta States and confessions by several kidnappers arrested earlier who confessed that One Iliyasu Ahmadu is their gang leader,on the instructions of IGP Adamu Mohammed serious manhunt was launched by IRT towards the arrest Of the kidnap kingpin.

After Several weeks of unrelenting follow up,the gang leader of the kidnappers Iliyasu Ahmadu, 29yrs and a native Of Kafio LGA of Nasarawa State but born and raises in Edo was arrested in Edo State by IRT.

The kidnap kingpin confessed to several kidnappings and killings in Edo and Delta States. He also led IRT detectives to a forest in Delta State where 2 AK47 rifles with S/Nos:6855 and 27534 (Ak49) he buried in the forest were recovered. 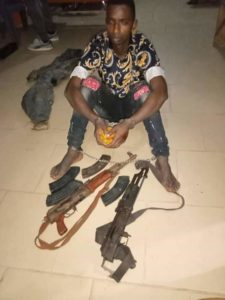