Oyo State Governor, Seyi Makinde, has visited a mosque in the state to inform the worshippers of his government’s plan to demolish the mosque.

In a tweet on Friday evening, Mr Makinde said he attended Jumat prayer at Adogba Mosque on Iwo Road and informed worshippers of his plans to create a new bus terminal on Iwo Road.

He assured the worshippers that the move was not an attack on religion, adding that his government would compensate adequately for the inconvenience.

“We attended Jumat prayer at Adogba Mosque on Iwo Road, this afternoon.

“I spoke to our Muslim brothers and sisters about the proposed demolition of the mosque, a church and some other buildings by the government, to make way for the new bus terminal on Iwo Road,” he wrote.

“I assured them there was no religious colouration to the proposed demolition and that the government will relocate all those affected and pay compensation to ensure they can rebuild.

“I sought their cooperation to enable the government execute its plans for Iwo Road.” 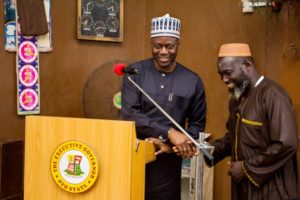