Unarguably, the condition of roads in Lagos State has never been as bad as it is today. Indeed, most roads in the State are in a terrific state of disrepair.

Everywhere you go to in the state, there is a sad tale to tell of the shambolic condition of roads there. Potholes of diverse sizes and numbers are prominent features of most roads in the state.

Meanwhile, the current administration in the State is sparing no effort to return Lagos roads to its former glory.

Furthermore, and in fairness to the Babajide Sanwo-Olu-led administration, most of the pothole-riddled roads were inherited from the previous administration. The current state of roads in Lagos is mainly due to little or no interest in road rehabilitation demonstrated by the Akinwumni Ambode-led administration.

Upon assumption of office, Governor Babajide Sanwo–Olu, signed his first Executive Order on Thursday 30th May 2019.

Part of the Executive Order directed that the Lagos State Public works Corporation (LSPWC) to commence patching and rehabilitation of bad roads to address the perennial problem of traffic in the State.

See also: State Of Emergency Declared On Lagos Roads By Gov. Sanwo-Olu
In obedience to the Executive Order, the LSPWC has commenced aggressive rehabilitation of roads around Lagos state.

In a statement, the Governor said, “We totally understand the plight of all Lagosians regarding the state of our roads. We are fully aware of our responsibility, and we do not plan to fall short of it.”

“Though the current weather has not been favorable, we are putting together measures to ease the burden of commuters”, the governor said.

Currently, extensive rehabilitation works are ongoing on some major roads in the State.

Some days ago, Gov. Sanwo-Olu went round inspecting some of the roads being worked upon to assess the quality of work and materials used.

Amongst the roads inspected by the Governor are Ahmadu Bello way and Bonny Camp axis.

Accompanying him on the tour was the Special Adviser on Works and Infrastructure, Engineer Aramide Adeyoye.

See photos of the inspection by Governor Babajide Sanwo-Olu below. 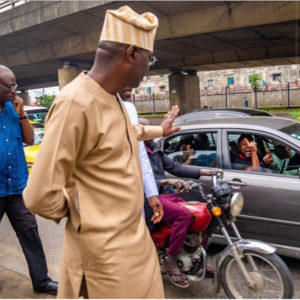