Davido’s second baby mama, Amanda has stated that the daughter they have together is the most special baby the singer will ever have, not the one he’s expecting with Chioma.

This was after Davido went on Beat FM to hint at expecting a baby with his fiancee Chioma whom he will be getting married to next year.

On the show, he was reminded that it was on radio he made the revelation of expecting his second child with his Atlanta based baby mama, Amanda. In response, Davido said:

”This one is special”

Reacting to Davido’s statement, Amanda took to social media to shade him.

This she did on Instastories with a video showing her and their daughter Hailey playing.

In the caption, she wrote:

“The most special baby”. 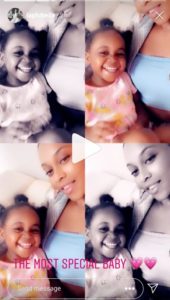