Man City legend Yaya Toure was sent off after just 10 seconds in what could be the last professional game of his career, MySportDab reports.

The 36-year-old was shown a red card after aiming a kick at his opponent, and was dismissed following a VAR review.

The match was said to be the final game of Toure’s career as a professional footballer for Chinese Division 1 side Qingdao Huangha, with his side eventually going on to lose 2-1 to Nantong Zhiyun.

The incident occurred after Qingdao started an early attack which ended with a shot on goal.

Toure ended up tussling with his opponent and ended up kicking out at him.

The incident was picked up by VAR, which ended with the referee showing Toure a red card after reviewing the footage. watch the video… 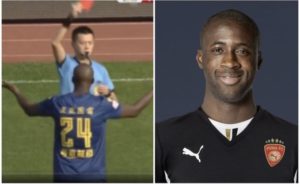 Yaya Toure was shown a red card just 10 seconds into the game after a retaliatory kick to the opponent.

Sad to see him end his career this way!pic.twitter.com/Q3IZGhIpaI