“At 14, I needed to get some money, because it was difficult at that age. With my first kid, I said that I had to do everything to become a footballer.”

Wesley’s dad passed away when he was just nine years old. “When my father died, it was difficult because my mum was alone with me and my brothers but she worked and now today I do everything for her.

“When I finish training I call my mum because she is everything. My mum did everything to help me play so everyday when I come home I call her.” It’s not just his mother and brothers who he has supporting Villa from back home in the south-east of Brazil.

“I had my first child when I was 14 years old, it was difficult because it was during this time that I started to try and play football professionally. I had to work in the day and then go to training in the evening.”

Playing football and being a father proved a tough balancing act but he began to take the sport more seriously when baby number two came along. “I was 14 when I had my first kid and 16 when I had my second. When I had my children I told myself I had to do everything to be a football player.”

It was a lot of pressure for Wesley to deal with, the Premier League must seem like a breeze, “When I play I have to think about my family, my kids, my mum, everybody.”

The clock was ticking then. Make it as a professional footballer or get a job in order to support his new family. Wesley made the journey to Spain for six months but despite training and learning from Diego Costa, his trial didn’t work out at Atletico Madrid.

Shorter spells in France went the same way and he soon found himself back in Brazil working in a factory, “I had to do something,” he says. “I had to get money for my kids. I would go to a team and every team said no. I went to six teams before going to Slovakia.

“When I went to the sixth team I thought I didn’t want to play football anymore. I thought it was finished for me. Then I got a chance.”

The opportunity came when he was 19 in a small town called Trencin in Slovakia, quite the contrast to what he was used to. “The first few weeks there were difficult. It was very very cold. The first three months I think it was snowing all the time.”

He gestures towards his toes. “I came from Brazil and I couldn’t feel my feet so it was difficult to play football.” Temperatures barely climbed above freezing in Trencin but that was where Wesley’s career began to take an upward trajectory.

He converted from a midfielder to a striker. “When you play midfield you have to think fast and then I moved to play as a striker and kept thinking fast.” A forward as sizeable as Wesley was a tricky proposition for defenders and a transfer to Club Brugge in Belgium quickly followed.

Nineteen league goals across two seasons saw Villa pay out a club-record fee for Wesley following their promotion to the Premier League, so does the 22-year-old think about what might have been? “I am very happy playing in the Premier League in the biggest competition in the world.

“Every day I think about the past, you know, what I was thinking when teams were saying no to me so I’m very happy now that I have this job.”

Wesley’s rise from struggling to make ends meet in Brazil to early success in England becomes even more remarkable when you consider that he has a condition he can do nothing about.

His right leg is almost three centimetres shorter than his left. “I don’t know what I can say”, he chuckles. “I have my legs like this you know and I don’t have any pain or anything like that. I hope to continue like this.”

Wesley’s head coach at Aston Villa Dean Smith does his due diligence before signing any player. He goes to meet them and looks for one particular first impression. “Can they hold a conversation with me?” Smith says. 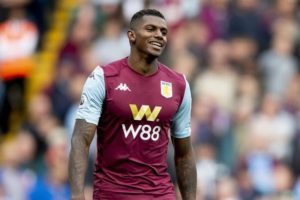