The suspected kidnapper is identified as Taofeek Lawal, said he hailed from Osogbo, Osun State. He also confessed that he used the ransom he gets from the kidnapping to sponsor his wife’s education in the higher institutions in Ile-Ife, Osun State.

Lawal also confessed that his targets are children between the ages of 4 and 6, and he collects N100,000 for ransom of each child.

According to him, he has other 15 men that work with the politicians and town leaders and they call him whenever his assistance was needed.

“I have built two houses, a mosque, and a church”, he added. Lawal also revealed his parents are aware of what he does.

An OPC official at Olaifa zone, Mr. Babatunde Atiba, explained that Congress got a hint of the activities of the suspected kidnapper through a woman. Lawal has been handed over to the Oyo State Nigeria Security Civil Defence Corps (NSCDC) for proper investigation and prosecution. 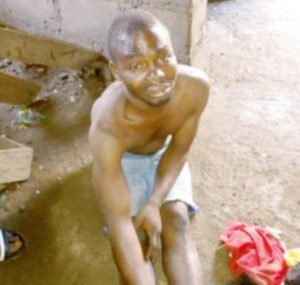