A former Minister of Petroleum Resources, Diezani Alison-Madueke, has prayed the Federal High Court in Lagos to order the return of her 2,149 pieces of jewellery and a customised gold iPhone valued at $40 million, Igbere TV reports.

The Economic and Financial Crimes Commission (EFCC) had on July 5 secured the order for the temporary forfeiture of her property.

Mrs Alison-Madueke filed the request in an application by her lawyer, Prof. Awa Kalu.

Diezani, who is currently in the United Kingdom, accused the EFCC of entering her apartment illegally and taking the items without any court order.

She said the anti-graft agency violated her fundamental “right to own property and to appropriate them at her discretion,” under sections 43 and 44 of the Constitution.

The former minister urged the court to reject EFCC’s prayer to permanently forfeit the jewellery and the gold iPhone to the Federal Government.

Diezani said the court lacked jurisdiction to have granted the interim forfeiture order in the first place, as she had not been charged with any crime or served with any summons by the EFCC.

Her lawyer’s absence in court stalled proceedings on Monday.

However, Igbere TV gathers that a lawyer from Kalu’s chambers, Chukwuka Obidike, told the court that he was engaged in election petitions. 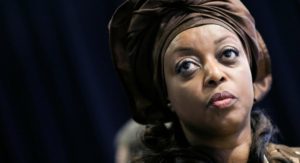