The Abuja residence of 2nd Vice President of the Nigeria Football Federation (NFF) Mallam Shehu Dikko, has been sealed by the Independent Corrupt Practices and other Related Offences Commission (ICPC).

This is following an order of forfeiture of the property by a Federal High Court on Friday, according to The Cable.

The house was sealed by the commission over a fresh corruption investigation on the federation.

According to the ICPC, the investigation is to uncover financial malpractices in the football association, allegedly involving Dikko and other executives.

Rasheedat Okoduwa, ICPC spokesperson, told TheCable that Dikko’s property was sealed following fresh corruption charges against him and some other executives of the NFF.

“It is true that ICPC sealed Shehu Dikko’s Maitama residence this morning,” she said.

“He is being investigated with others over fresh corruption charges. It has nothing to do with the cases of SPIP or EFCC.” 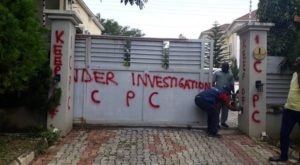