Chief Whip of the 9th Senate, Senator Orji Uzor Kalu has declared that he would win repetitively if elections were conducted 20 times in the entire Abia North Senatorial Zone.

This is following the September 9th judgement of the Abia State Election Petition Tribunal which ordered for supplementary elections in some units of Abia North Senatorial Zone.

Kalu stated this on Thursday when the APC party Chieftains in Abia state led by its Chairman Hon. Donatus Nwankpa and the Minister of Mines and Steel Development, Uchechukwu Ogah, paid him a solidarity courtesy visit in Abuja.

The party leadership stated that they would challenge the ruling at the appeal court however, they were ready to face the supplementary election to retain the Chief Whip of the 9th Senate, Orji Uzor Kalu.

Nwankpa, who spoke on behalf of the delegation also seized the occasion to announce the rejection of the Abia State nominee on the board of the Niger Delta Development Commission.

He said, “We are here today in solidarity with the Chief Whip of the Senate. We are ready to be part of the election even if elections were to be held today.

“We are ready to appeal the judgement.

“There were flaws in the judgment Senator Orji Uzor Kalu’ case as declared by the tribunal. He has not been sacked. The court has not asked that his certificate of return should be withdrawn.

“He remains the Chief Whip of the 9th Senate and all things being equal, nothing would change it.

“What happened was a temporary set back and a distraction to the APC in Abia.”

He said the people of Abia – North were ready at all times to vote the former Governor of the state, nothing that if election was to be held twenty times, Orji Uzor Kalu would be returned.

“We are ready to appeal that judgement. You know how President Muhammadu Buhari’s case was delivered on yesterday (Wednesday) and that further exposed the flaws in Kalu’s case.

The APC chairman, who addressed journalists after the courtesy visit, said the party in the state rejected the NDDC nominee because he was not known to the party. ”

He said, The APC in Abia State rejected the NDDC nominee. He is not known to the party and he cannot represent the interest of our people well.

“We have asked the Abia representatives in the Senate to reject him whenever he appear for screening.”

In his remark, Senator Orji Uzor Kalu explained that he would not lose sleep over the development, emphasising that he would win election anytime.

“In Abia North, we are not losing sleep. In Nigeria, if we conduct election in Abia North twenty times, I will win”, the lawmaker insisted.

“The sanctity of Court anywhere in the world is that if one is displeased with judgement, he can approach the upper Court and that is what I will do.

“I was not removed, I wasn’t sacked as reported in the media. The Court didn’t asked someone else to be sworn-in, in my place. We have our votes in tact and since the law allows me to appeal, I will appeal the judgement.”

The lawmaker said Courts don’t award remedies not sought for, hence, he remained the lawmaker while pursuing the case in the Appeal Court. 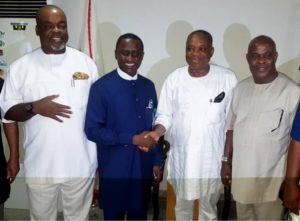