The activist was arrested by Scotland Yard Counter Terrorism Command for allegedly “stirring racial discrimination ” against the Igbo and Fulani ethnic groups and also “ encouraging terrorism ” .
He has since been released , however , on his Twitter handle , he revealed , “ I cannot access, use or post on Facebook , YouTube, Tumblr or a website linked to the YYF, which of course doesn ’ t belong to us . ”
Meanwhile , the group has denounced reports that Grandson was charged with any crime.
Asake in a statement said , “ Adeyinka Grandson has not been charged for any crime . He is required to report back to the police station on the second of September 2019 . The Young Yorubas Forum has no idea what the police plan to do with the allegations of terrorism and public order acts. ” 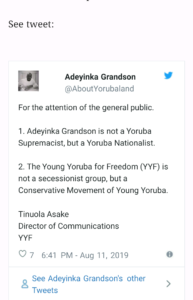