Reports reaching us from India shows that the hospital has agreed to the request of Sheikh El-Zakzaky to use known and appointed doctors for his treatment.

In a new videotape made available to PRNigeria, the representative of Islamic Human Right Commission(IHRC) said the issue in contention has been resolved and that El-Zakzaky has gone ahead to receive treatment with Doctors that were earlier appointed by him. El-Zalzaky had refused treatment from unknown doctors arranged to treat him and the wife aside those billed and booked to treat him before his departure from Nigeria. A member of the Islamic Human Rights Commission (IHRC) who said the attitude of Indian government has portrayed El-Zakzaky as a common criminal when no court in Nigeria has convicted him. The source said that the Indian government has given Elzakzaky ultimatum to leave Indian soil if he refuses to receive treatment from unknown doctors billed to treat him. “I just received a very worrying news from the Indian government that ultimatum has been given to the Leader of the Islamic Movement of Nigeria(IMN) to leave India if he does not agree to the Doctors specified to treat him. From the way that he is being treated is extremely bad”, the IHRC representative said. “Under the current situation, it seems he has no choice other than to go back to Nigeria.

He has been given hours to respond to their ultimatum. This is to me is totally, utterly unacceptable by any standard, either international standards or Indian standards or that of humanity”, the IHRC chief said. He further noted that “This is a man that has not been found guilty of anything to the extent that in his own country, the highest court has granted him permission that he should be treated. The Indian government by their behavior depicts Sheikh Elzakzaky as a common criminal. This is really outrageous and those who stand for justice should please respond.”

Below are five points raised by the cleric: EXPECTATIONS UNMET El-Zakzaky certainly expected more when he boarded this flight El-Zakzaky said there was an agreement that he and his wife would be tended to by doctors they approved of in Medanta Hospital in India. He said, however, upon arrival, they met another set of doctors different from the ones they had chosen. “We are happy and we know that by coming here, we’ll get a befitting hospital that will perform the surgery. The medical advice to come to this hospital which they call Mendata was given to us by some foreign doctors that visited us in Nigeria and that was why we requested we should be brought to this hospital,” El-Zakzaky said.

“While in Nigeria, we got information that the United States Embassy had given and instruction that we shouldn’t be accepted in this hospital when we arrive. Back home in Nigeria, they agreed that nobody should take us to any other hospital aside the hospital of our choice but we got to realize that the doctors they brought to us were there just to give advice. We then told them we won’t allow any other doctor aside our trusted doctors to attend to us so that they don’t do to us what they couldn’t do with their bullets in Nigeria.” ‘BULLET IN MY WIFE’S BODY’ El-Zakzaky says there’s a bullet in his wife’s body”We came here for medical treatment due to some ailments that I and my wife Zeenat have been suffering from.

There is a bullet in Zeenat’s body and there is also the need for her to get her two knee caps replaced amongst other ailments,” he said. “On my own part, there are also particles of bullets that were broken into pieces in my eyes, hands and thighs which have been poisonous to my body. I think what they are supposed to do first of all is to extract these bullets which I know the surgery cannot be done in Nigeria hence the reason for my referral abroad. “Secondly, the poison needs to be extracted from my body, some of it they said is in my bones and they said the surgery will take some time. I also have problems with my eyes.

Since after the second surgery, my eyes have been weak which I was also advised to travel to India for surgery.” HOSPITAL OFFICIALS ‘TRICKED HIS SUPPORTERS’ Are these among the officials the cleric doesn’t trust? He said he was informed by the hospital management that there was an attempted siege on them at the airport and hospital entrance. “While driving from the airport to the hospital in an ambulance, the staff of the hospital were narrating how some people besieged the airport just to see us before proceeding to the hospital, but they (the hospital) tricked them by keeping two ambulances at the location where my supporters were waiting and drove us out in another ambulance at a different location,” he said.

“They also said another set of people besieged the hospital just to see our arrival but they decided to use an alternative entrance to the hospital because the were trying to avert any stampede. “When we got here, a staff of the Nigerian embassy told us that they already assembled with the staff of this hospital and security operatives discussing on what to do when we arrive. They later took us to an Indian security outfit that is even more sophisticated than the one we were kept in Nigeria.” POSSIBLE ATTEMPT ON HIS LIFE El-Zakzaky said he and his wife would refuse treatment from any doctor except the ones they have chosen.

“All what we have seen here, have shown us that there is no trust, they just brought us here for another detention. I have been in detention for about thirteen years but I’ve never seen this kind of security that I’m seeing here, even at the door of my hospital room, there are many security personnel waiting, heavily armed,” he said. “They didn’t even allow me to go to the next room, I started asking myself, all these while I’ve been in detention, I’ve never seen this type. Even if I’m in the cell, they usually lock us up around 9 p.m. and open the cell around 7 a.m. and they allow us to go anywhere we want in the area we are.

“Even Kirikiri prison will not affect me psychologically like this one. It will not be possible for us to come out of detention just to get medical attention and now find ourself in another form of detention” ‘WE CAN’T TRUST INDIA’ He further said he could not trust the Indian authorities, citing Malaysia, Indonesia and Turkey as preferred destinations. “We won’t submit ourselves to people we don’t trust.

There is a need for us to go back home since it has been agreed that we should travel out to get medical attention and India is not a place we can trust,” he said. “There are other countries that have volunteered to take care of our treatment, some are Malaysia, Indonesia and Turkey. We can choose from amongst these three.” 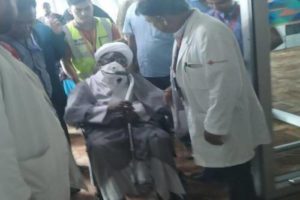