Inter Milan expect to find out by Wednesday if they have a chance of signing Manchester United forward Alexis Sanchez on loan.

The Serie A club have already signed striker Romelu Lukaku from United and are now targeting the Chile international.

“At the moment he is our player. Some clubs have shown interest in Alexis.”

Sanchez, 30, was not named in United’s squad to face Wolves on Monday.

Inter are understood to be putting together a deal to present to United on Tuesday or Wednesday.

Last week, Solskjaer rubbished claims the forward had been training with the reserves and insisted he would “come good” at the club.

United are aware of Inter’s interest and are understood to be open-minded about doing a deal, if terms are acceptable.

Sanchez is thought to earn around £400,000 a week, a figure way outside of Inter’s current pay structure, and it has been suggested United may subsidise his salary as part of a deal.

However, Solskjaer could opt to keep the former Arsenal and Barcelona man as cover. Injuries or suspensions to Anthony Martial or Marcus Rashford would leave him short of attacking options.

The Norwegian has faith in 17-year-old Mason Greenwood but, given a congested fixture list that includes a Europa League campaign, it would be a gamble to rely on only three main strikers.

Sanchez has had a disastrous 19 months at Old Trafford since leaving Emirates Stadium in January 2018, scoring just five times in 45 appearances.

He scored twice last season – and only once in the Premier League. He subsequently scored twice for his country in their run to the Copa America semi-finals this summer.

Sanchez’s presence at the tournament prevented him playing in any of United’s pre-season games. 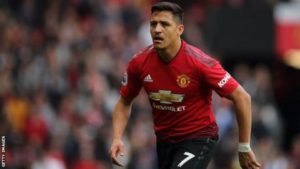