The dust recently raised by the sharing formula of the job slots allegedly allocated to the Senate by the board of Federal Internal Revenue Service (FIRS) appears to have settled temporarily with a promise that aggrieved senators will be compensated with impending slots from other federal government agencies.

A dependable source at the upper chamber of the National Assembly informed SENTRY that new job slots meant for the Senate would soon arrive from the Central Bank of Nigeria (CBN), the Nigerian Communications Commission (NCC) and the Nigerian Security and Civil Defence Corps (NSCDC) with assurance by the Senate leadership that aggrieved members will be “settled”.

The source , who described the sharing of job slots among senators as a tradition, however, said the aggrieved senators have insisted the sharing formula for the job slots must be made clear unlike what happened in the lopsided sharing of those of the FIRS.

The source added that only 40 job slots were given to the Senate by FIRS, contrary to the 100 that was earlier reported. The Senate President Alhaji Ahmad Lawan, it was learnt, got 23 of the slots contrary to the 26 reported; the Deputy Senate President, Senator Ovie Omo-Agege, got three, while the remaining slots were shared among the principal officers. With more slots to follow, those who were unhappy that they were sidelined during the last job bonanza are patiently waiting. 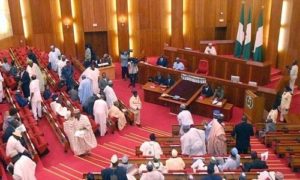