A political activist and former Deputy National Publicity Secretary of the All Progressives Congress (APC), Comrade Timi Frank, has called on Nigerians, particularly those who worked against the re-election and sabotaged the former President Goodluck Jonathan to publicly tender an apology if the country must move forward.

Frank said unless Nigerians prefer to continue in pretence, the era of former President Jonathan managed well the challenge of insecurity compared to what the country has now.

In a statement Timi Frank released to newsmen in Abuja on Saturday, called on religious leaders, traditional rulers and all Nigerians who directly or indirectly worked against Jonathan’s government to ask for forgiveness before it is too late.

Frank acknowledged that there were things Jonathan’s government should have done better but in all Nigerians made a wrong choice of electing the current administration.

“I call on Nigerians that we should beg former President Goodluck Jonathan for wrongly voted him out and sabotaged his government. I must confess that as an APC figure in 2015, we fabricated many lies against Jonathan, though I have publicly apologised to him but other Nigerians, especially the pastors, Imams, traditional rulers and other opinion leaders should beg for forgiveness too.

“It is obvious now that insecurity in our Nation has gone out of hand. The challenge was limited to a zone under Goodluck Jonathan but presently no state, including General Buhari’s home state is secured.

“There was democracy and rule of law under Jonathan but its now rule of force and impunity. Under Jonathan, National Assembly were active and working but its now a rubber stamp.

“Under Jonathan, there was freedom of speech but that has long gone under the APC administration.

“Under Jonathan, poverty, hunger and unemployment were not as bad as it is today. Under Jonathan Nigeria was a unitedunited Nation but sentiments have taken over now.

“As it is now, all the institutions of government that were working well under Jonathan have all been blackmailed and politicised.

“So, I call on others who betrayed Jonathan to come out publicly and apologise to him. I also use this opportunity to appeal to former President Jonathan to forgive Nigerians and bless the Nation against the evils that have pervaded the land.”

Frank said Nigerians should ask the APC administration what happened to the $1 Billion ECA money removed to fight insecurity in Nigeria.

He called on Nigerians to support a peaceful revolution to take back Nigeria to the good old days from the hands “evil men in power.” 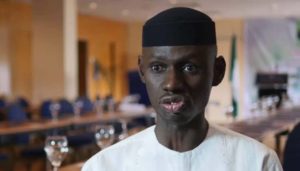