Chelsea could lose Willian to Juventus despite Frank Lampard insisting he wants to keep hold of the winger.

The 31-year-old, who is in the final year of his contract at Stamford Bridge, could leave as a free agent next summer.

He will be free to talk to and sign a pre-contract agreement with foreign clubs in January and Serie A champions Juventus are weighing up a move for the Brazil international.

Willian has spent six years at Chelsea following a £31m move from Anzhi Makhachkala, making 295 appearances across all competitions and winning five trophies.

He is yet to start in the Premier League this season, though, with his three appearances under new boss Frank Lampard coming off the bench.

Willian’s preparations for the 2019/20 campaign were hit by his involvement in Brazil’s successful run to the Copa America title.

Chelsea have offered him a new two-year deal, but no talks have yet begun between chiefs and his representatives.

That’s despite Chelsea gaffer Lampard saying he wants the forward to stay as Juventus monitor the situation.

However, the chances of that deal happening withered away when his former Blues manager Jose Mourinho was sacked last December.

Juventus have built one of the most formidable clubs on the continent, made up of a mixture of big buys and savvy signings.

Landing Willian in a cut-price or Bosman deal would follow up their recent acquisitions of Emre Can, Aaron Ramsey and Adrien Rabiot on similar terms.

Chelsea lost Eden Hazard to Real Madrid this summer and will be reluctant to let go of Willian in January – particularly with a transfer ban preventing them from signing a replacement. 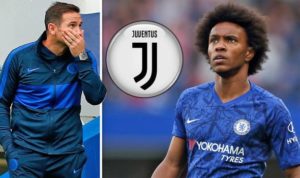