Parents of missing children have released a list of 47 children suspected to be abducted and taken to Southern parts of the country.

On Saturday, the Kano Police Command said it traced and rescued nine children kidnapped in Kano, trafficked to Onitsha in Anambra State and sold off for child slavery.

DAILY NIGERIAN gathered that the rescue followed public outcry by some parents that there was rise in cases of missing children in some areas of the metropolis.

Speaking to DAILY NIGERIAN on Thursday, the leader of the group of parents, Tajiri Hotoro, said the number of the missing children abducted within the last four years in just Nassarawa Local Government is more than 100.

Nassarawa is one out of the 44 Local Government Areas in Kano State.

Presenting the list and pictures of the children to our reporter, Mr Hotoro said there are more parents of missing children who did care to register with their group.

“Quite a number of parents have resigned to their fate. Some do not even have the transport fare to attending our meetings.

“We are calling on government and other relevant agencies to join together to rescue our children. We are in deep agony,” he said.

He said 10 suspects were arrested by the police and arraigned two years ago but were later released by the court.

According to Mr Hotoro, lawyers and court officials stopped them from talking to press, despite the fact a state High Court sitting in Ungogo had set free the suspects. 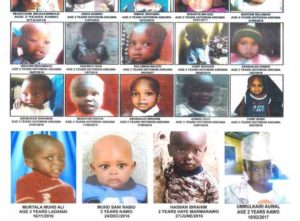