Kanye West and a choir of at least 120 people, opening the service with the gospel song, “Prince of Peace,” and also performed Damian Marley’s “Welcome to Jamrock.”

During the performance, Kanye addressed the crowd saying;

“I just want to thank Jamaica for the open door they gave us. I want to thank the Government, the police and the people of Kingston.”

He closed the Sunday service in Jamaica with “Jesus Walks.”

Some of the people in the crowd were seen overwhelmed with emotion as they were sobbing.

It held at the Emancipation Park in the Jamaican capital, he is continuing his new tradition of making the event free and open to the public. 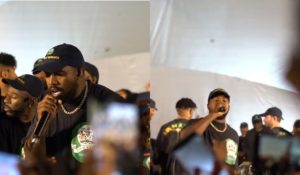