Gunmen suspected to be kidnappers have killed a Jalingo-based Imam known as Mallam Gambo and one other person between Sibre and Jauro Yinu near Jalingo.

The gunmen it was gathered also abducted occupants of a vehicle and took them into the bush.

However, our correspondent gathered that hunters went after the suspected kidnappers on Tuesday.

One of the hunters who participated in the operation told our correspondent that many of the kidnappers were wounded in the attack and some of their bases in the bush destroyed.

An eyewitness, who escaped the attack on Sunday night told journalists in Jalingo on Wednesday that the gunmen had blocked the road and were firing at vehicles coming from both directions.

The eyewitness who pleaded anonymity told our correspondent that he was stopped by some villagers close to the scene and informed that some gunmen had blocked the road.

“Some of us were lucky because the villagers alerted us that gunmen blocked the road.

“Later we were informed that the gunmen took some people inside the bush but they were rescued by a team of police that came to the scene.

“For those killed, it was learnt that they attempted to fight the kidnappers and were gunned down,” he said.

Our correspondent reports that the kidnapped Transport Officer of Taraba Government House, Mr. Danlami Yunana is still being held by the kidnappers who have allegedly taken over the surrounding bushes around the Jalingo Airport. 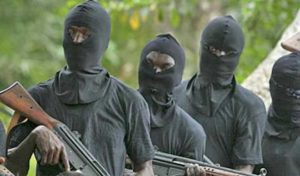