Videos of brand new Rolls-Royce vehicles driving out of a compound have Twitter users questioning the monarch.

While the country mulls over Finance Minister Tito Mboweni’s medium-term budget speech on the country’s economic spiral, eSwatini King Mswati III has left several on the Twitter streets gobsmacked after a video surfaced apparently showing how he had gifted his wives brand new Rolls-Royce vehicles.

Investigative journalist Mzilikazi wa Africa shared a picture and video of what he described as the brand new buys for the king’s wives.

While the monarch has over 13 wives, footage of the cars only shows a few of the similar-looking Rolls-Royces driving out of what seems like a compound, still with a few stickers indicative of their new nature.

A source, from eSwatini’s Ministry of Information Communications and Technology, confirmed to The Citizen that the king had indeed bought the vehicles. She said the vehicles arrived on Tuesday but was unsure on the exact number of the cars.

In 2009, Forbes named King Mswati among the top 15 wealthiest royals in the world despite the fact that he rules over one of the world’s poorest nations. Later they reported that “his personal net worth is at least US$50 million, based on the annual US$50 million salary that he is paid out of government coffers”.

The Citizen counted five cars in the footage but the lady speculated that she had heard that the number of cars to replace the cars of the wives stood at 13 or fifteen cars. 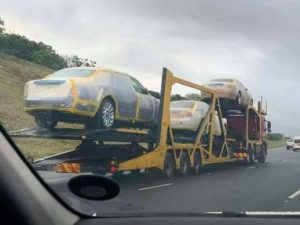