The People’s Democratic Party (PDP) governorship flagbearer, Engr. Wada Musa and Senator Dino Melaye have been reconciled ahead of the 16 November gubernatorial election in Kogi.

This development was followed by the reconciliation of the Kogi state governor Yahaya Bello with the All Progressive Congress (APC) national and state excos.

The duo (Dino and Wada) were recently spotted on camera while embracing each other in a friendly way.

Recall the last PDP primaries in the state saw the declaration of Wada as the party flagbearer having scored the highest number of votes cast while Dino came fourth with 70 votes cast. 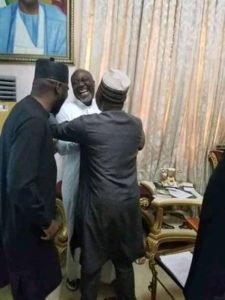