A distraught Nigerian lady has narrated her ordeal in the hands of some hoodlums who attacked her during the anti-xenophobic protest which went sour in Lagos.

According to the lady, her car was not tinted and those that attacked them could clearly see they were everyday people like them. She further revealed that the first person to wield a stick in her direction was a woman, which was followed up with a vicious attack by the men.

She disclosed that blood trickling was trickling from her face, arms and leg after her car’s front and rear screen was shattered by stones thrown at her by her attackers. 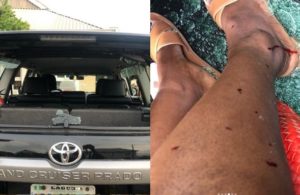