A Nigerian writer has narrated how she was duped by a fake real estate agent and how God compensated her eventually.

@anafrricandiva revealed that in 2009 she made an initial deposit of N150, 000 to an agent for a mini flat, only to later discover that she had been scammed and the house had been rented out to dozens of other people too.

She said she developed malaria immediately. However, two months after the incident, a friend of hers gave her a fully furnished 3-bedroom flat in Ikoyi to live in rent-free for five months.

It was in that apartment that she met the man who is now he husband. 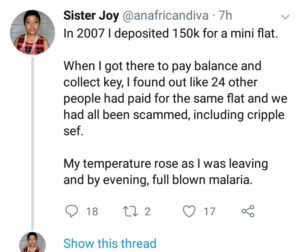