09:55 At the Lagos State #EndSARS Judicial Panel of Enquiry.

It’s one month since the morning of the “powers above my control” speech, and we may finally be watching the footage from the night of #LekkiMassacre.

The military are here, so are the lawyers. And lots of cameras!

09:46 At the Lagos State #EndSARS Judicial Panel of Enquiry on this one month remembrance of the #LekkiMassacre.

A near empty room. The panel registrar is watching a political TV segment from his phone rather loudly.

More petitioners have come to submit their letters.

10:27 The punctuality record for the panel is 10:21. That was the first day the Army made an appearance.

We aren’t breaking that record today, but the panel is here, 6 minutes off that 10:21 record.

Mr. Ebun Adegboruwa is not here again. Trying to figure what is up with him.

10:30 LCC have been called, as their testimony and video has import on the Army’s testimony.

LCC MD is here. Late, but here all right. LCC and LASG legal are here.

For #Endsars, we have Mr O and the retired boxer, Mr. Fusika.

10:38 Mr. O is up now to speak to the integrity of the video supplied by LCC.

Going to be a long ride.

Power is back! The LCC video is being played from 5pm.

10:54 As with the first day, when the footage was shown, the strategy is to show the protests were peaceful.

Another important point is that so far, the camera is as being panned automatically. But the #EndSARS lawyers believe later on, it was being operated manually.

That’s because the camera movement is programmed. It’s believed that later on, the preset were overridden by LCC staff.

But LCC say all staff were gone by 4pm.

11:30 The CCTV video we are watching isn’t ghen ghen like the CNN one. It has no sound. So people are falling asleep. Lady in frame 4 is jejely drinking her Fanta.

11:51 we are at 18:05 of the CCTV clip now. So far, no hoodlums trying to burn down Oriental Hotel as alleged by the Army testimony. Just people milling around.

We’ve also noted on human intervention in the video preset movement. This confirms LCC staff were at work past 4pm.

12:00 At about 18:12, the crowd is growing at the toll gate. More people actually arrived after the 4PM curfew time (although the curfew did get push to 9PM).

In a way, it feels like the quiet before the storm. Military is believed to have arrived about 18:55.

LCC had claimed all staff left the facility. The video shows this to be untrue.

Also, power is off in only one section – the security lights. All other lights on.

12:38 The guy showing the video has technical challenges. The audience starts “Something is wrong”. People here are highly suspicious of government.

But the video is back. 18:49 military are sweeping the area. Some protesters run away. Others gather (this video is silent).

12:43 Please note the image from the video. The lights on the express lane are still on, while the lights near the toll gate are off.

12:45 At about 18:52, the video was switched to black and white format. While we lost colour, we can also see clearly.

The video is fully manual. There is power at the toll gate.

12:47 We just saw the 18:56 moment when the lights on the express lane and beyond were turned off.

Some military trucks have crossed to the protesters’ side of the toll. A bullet is seen flying though the air. From what we were told, blanks don’t have that kind of trajectory.

12:52 About 19:00 is the last stand. The military move in and the crowd starts dispersing.

Lower right of the screen are soldiers moving into position as protesters vacate. This matches what was seen in social media videos.

12:54 At about 19:04 the military have almost complete control of the central area where protesters were.

Protesters have run to the far left and are mostly moving towards Lekki. Soldiers take over vacated space.

(Vehicles with blinking lights are military).

12:57 At 19:06, we have 4 military vehicles in formation, pushing the protesters out of the toll gate area, with only one way to go – Lekki.

The vehicle top right ensures protesters don’t cross to the side near Shoprite.

13:00 We are looking at 19:09 on the video. While a most of the protesters have run towards Lekki, a small group is huddled by the toll gate (lower centre), right where they were before.

We suspect this was the group where DJ Switch was.

13:04 It is now 19:14 on the video. The military vehicles have surrounded the small crowd. One vehicle is high up Lekki Expressway (top right). This will be important later.

Also important to note vehicle lights are pointed away from the crowd. There’s still power at toll gate.

That is a fire, and the military vehicle is right beside it. Recall the vehicle up the highway.

The military was in control of the area when the fire started.

Protesters now running toward the lagoon side of the plaza.

Please note that nothing is certain from this video orientation and resolution.

13:21 The room is rather quiet. It’s hard to believe we are watching what we obviously are.

19:23 At this point, the military is in control of the area. There’s power at the toll, but no security lights on. The camera is manually operated.

The fire up the road is growing. 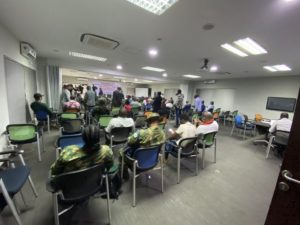