The Chairman of the agency, CSP Olayinka Egbeyemi, said on Thursday in Lagos that the motorcycles were impounded around Ejigbo and Cele Bus Stops on Wednesday.

Egbeyemi said that the agency had commenced clamp down on illegal commercial motorcycle operators plying restricted routes, including all inner streets across Lagos for security reasons.

He said that the agency was compelled to embark on the crackdown, sequel to series of complaints received on daily basis from innocent members of the public.

According to him, members of the public have complained about criminal activities perpetrated by the illegal commercial motorcycle operators early in the morning and late at night.

”We are going to ensure that there is total compliance with the Lagos Traffic Regulations by all commercial motorcycle operators across Lagos.

“These include motorcycle operators in all our local governments and Local Council Development Areas (LCDAs), as well as by those operating within inner streets.

”Motorcycle operators must avoid restricted routes, not carry more than one passenger, pregnant woman, adult with baby and child below 12 years.

”The operator must not install any musical gadgets, must wear an apron, not operate beyond 10.00p.m, operate with a rider’s permit and have their motorcycles registered with the state government,’’ he said.

Egbeyemi said research conducted by the state government revealed that most riders of the illegal commercial motorcycles were not from Nigeria, but from neighbouring countries.

The agency chairman said that some of them were also involved in criminal activities in the state.

He, therefore, warned all commercial motorcycle operators to ensure that their motorcycles were duly registered with the state government.

“Anyone caught will be seriously dealt with in accordance with the law,’’ he warned.

Egbeyemi also urged the general public, especially motorists to ensure that their valuable items were safely kept while in traffic.

He called for the cooperation of all residents in providing useful security information about criminal activities around them to security agencies through the Lagos State free Emergency Toll Lines 112 and 767. 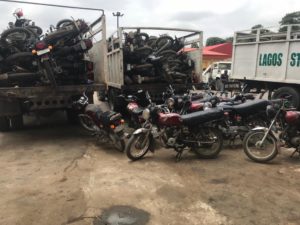