Lagos State Governor, Babajide Sanwo-Olu, over the weekend, had an interview with CNN journalist, Becky Anderson where he stated that only two deaths have so far been recorded in the gunfire incident that rocked the #EndSARS protest at the Lekki tollgate on Tuesday, October 20.

He said so far no family member of deceased persons have come out to make any complaints that their loved one died in the incident. He also stated that there are no bloodstains at the scene of the incident.

I have been round and there is no splash of blood anywhere there.

He averred that the CCTV footage shows that men in military uniforms carried out the shooting. When asked if people will be held accountable for the attack, he said

When Anderson informed him that the question she asked was simple and that it was basically to know if those behind the attack will be held accountable, Governor Sanwo-Olu said

“I am not the Commander-in-Chief of the Armed Forces; I am Governor of a State. The report would be out and we would channel the report to all the relevant authorities in the state to ensure that every one that is found culpable is accountable for the act.” he said.

Watch the video from the interview below. 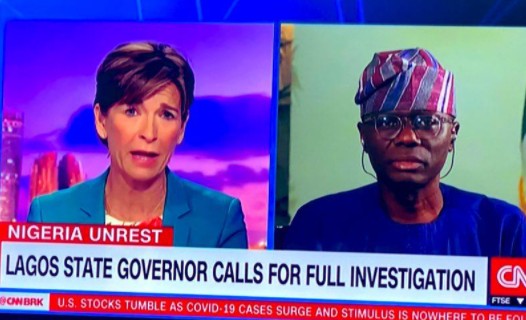