An unidentified man said to be mentally challenged was caught in the early hours of today October 26, picking used Sanitary pads.

The incident reportedly occurred in front of Tommlyn hotel which is at the back of Roban store in Enugu. The mad man was caught in the act after picking the sanitary pads a lady in the community just disposed.

An Instagram user @ada_gift_1996 who shared the video, wrote;

Happening now in Enugu at front of my work place…
A mad man was caught packing used pad in a dustbin in front of Tommlyn hotel which is at the back of Roban store Enugu.. It happens that a lady disposed her dirt in the ESWAMA dustbin which her used pad are inside immediately she turned a mad man approached the waste bin and start packing something. She said something touched her and she had to go back to the waste bin only for her to notice that the man packed every pad she tied in a black lylon.. It was then she alarmed those around and they chased and caught the so called madman. 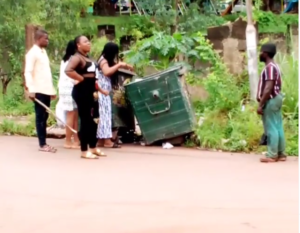