The embattled former chairman of the Pension Reforms Task Team, Faisal Abdulrasheed Maina “has started speaking up on how he spent the N24 billion”, Vanguard can confirm.

A top EFCC official conversant with the matter told Vanguard that Maina had started speaking up on how he spent the N24 billion, which the federal government handed over to him in ten commercial banks to use and pay off millions of its retirees across the world.

But in a twist that rattles the government and those who brought Maina to the top job, the team under him merely embarked on globe-trotting, sharing the cash with top government officials, under the guise of going round the world to verify the biometric of Nigerian workers.

According to documents at the disposal of the EFCC, which Maina signed off as approved expenditures and receipts for overseas and local trips by the Pension Reforms Task Team, no fewer than 200 top federal government officials were captured as ‘beneficiaries’ of travelling allowances for trips they did not embark on.

According to the documents, which the embattled official wants to rely on as his evidence of utilizing the huge cash of N24 billion released in 2011 to his team, a former Inspector General of Police, Director-General of the National Intelligence Agency, NIA, a Permanent Secretary in the Presidency, a controversial Head of Service of the Federation, Director of Budget of the Federation, two ex-chairmen of the EFCC and ICPC and hordes of officials have been listed along with their bank details and the amount collected by each for phantom biometric trips.

It was learned that Maina was ready to defend the expenditure by calling some or most of the beneficiaries as his witnesses although he has reportedly denied many of the payments and ownership of most of the houses traced to him.

It was learnt that many of the top government officials who are listed as beneficiaries were aware that Maina’s team had been making payments into their accounts even though they did not make the purported trips. It did not also summon the courage to reject and return the millions paid into their accounts by the PRTT.

It was gathered that most of them had since left public service might still be summoned to account for the public funds.

In a similar development, Maina’s son has been reportedly handed over to the Nigeria Police Force to prosecute over illegal possession of firearms and ammunition, Vanguard learnt.

The DSS in its report while transferring father and son to the EFCC last week, accused Faisal of pulling a gun against its operatives and threatening to shoot them.

The service listed items it arrested the father and son with to include: a pistol with live ammunition, bulletproof Range Rover Sports Utility Vehicle, foreign currencies and seven drones.

Vanguard gathered that the police would press charges against junior Maina, who was actually caught with the pistol firearms unless he produces appropriate licenses to operate same in Nigeria.

A source confirmed to Vanguard the 20-year-old student in the American University of Dubai had been transferred to the police, leaving his embattled father alone with EFCC operatives. 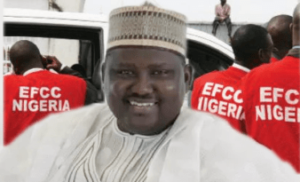