Thursday night was a proud moment for Harry Maguire as he captained Manchester United for the first time.

Harry Maguire was named Manchester United captain for the club’s Europa League clash against Partizan Belgrade on Thursday night, but things didn’t exactly go to plan for the world’s most expensive defender.

Ahead of kick-off at the Partizan Stadium, the 26-year-old was called by referee Xavier Fernandez to join him in a traditional coin toss as fellow captain Vladimir Stojković looked on with a grin on his face.

Fernandez, who was joined by fellow assistants Roberto Alonso and Inigo Prieto, were shouting ‘Maguire! Harry!’, before the England international awkwardly ran over to complete his duties.

Maguire, who has made 13 appearances under Ole Gunnar Solskjaer this season, eventually swapped crests with the Serbian goalkeeper on his first appearance in European competition.

Maguire later offered an excuse on Twitter, highlighting how long it had been since he last captained a side.

He wrote: ‘Last time I did this you did the coin toss in the centre circle. It’s been a long time’.

The Europa League group stage meeting in Serbia was Maguire’s first occasion wearing the armband since his record-breaking move to Old Trafford in the summer.

It was a moment the centre-back will want to forget as plenty on social media picked up on his antics.

“That has to be the least confidence inspiring bit of footage I’ve ever seen of a captain.” said one Twitter user, while another said: “He doesn’t even know how it works.” 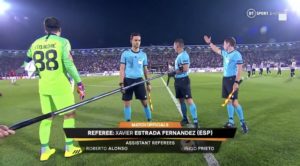